The Verity of Vampire, Part 3

Greetings, my fellow historians and mythologists!  I hope that you find these stories as entertaining as I do, for I enjoy recounting the various legends as to the beginning of vampires.  There are several more Christian based stories, crediting Job or Lazarus of Bethany as being the first vampire  - the former as a reward from God for surviving his trials and the latter as the means with which Jesus raises him from the dead - or crediting Noah and his family as accidentally becoming vampires, having only blood as sustenance for 40 days and 40 nights.  Yet, I feel that several of these stories reflect wishful thinking from various members of the homo lamia segment of society, for those who transformed after the  prolific propagation of Christianity retained the need to identify themselves as "Christian" in spite of their altered circumstances.  In truth, vampires roamed around before either Lazarus of Bethany or even Noah, at least as far as I have been able to determine through timelines and verbal histories.

But that is neither here nor there, but now we move on to India, and the story of Kali. 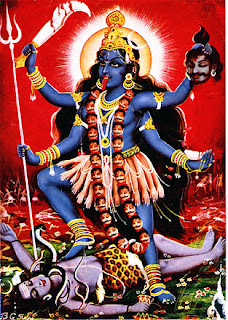 Kali, consort of Shiva, is a Hindu goddess of shakti, or sacred empowerment.  Her name means "the black one" and many associate her with death and destruction.  While Kali in her many forms emerges as a dominate figure in Hindu mythology, today I will relate one of her most famous legends, in which Kali fights with the Asura, or demon, named Raktavija.

One day, Durga, the Hindu Mother Goddess, attempted to kill the demon Raktavija by wrapping his body in chains and weapons.  But Durga did not know that for each drop of blood spilt by the demon, a new copy of Raktavija sprang up from the ground, attacking Durga and her minions.  Finally, Durga called upon Kali, who began to attack Raktavija by drinking up all of his blood while gorging on the copies.

Nearby villagers watched as Kali defeated the demon, happy to be rid of the evil that plagued their lives for as long as their collective memory.  To honor Kali and her victory, the villagers began to drink blood.  When Kali learned of their accolades to her, she bestowed upon the villagers some of her shakti, creating the first vampires.

Next week, we will cover current thinking in science about the origin of vampires.

All comments welcome.
Trolls will be eaten.

Welcome to The Vampire Handbook!

The Vampire Handbook contains information and advice for humans who are curious about vampires, humans who wish to become vampires, and for newly turned vampires. If you have any questions or to request information on a specific topic, please contact the appropriate author:
To ask a general question about vampires or vampirism, email Gregory.
To ask advice about how to date a vampire, email Jennifer.
To ask questions about werewolves or other supernatural beings, email Christy.
For all other inquiries, please email Sarah.