Christy's Musings: The Legend of the Fairies 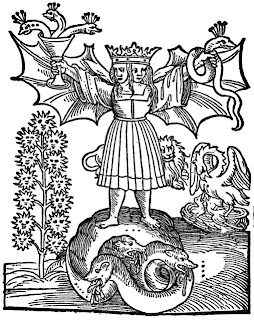 Well, much to my surprise I received an email this week asking me if fairies are real.  I assume from my previous posts that you know fairies exist, but Curious asked for more information. So here we go.

Fairies, in terms of cute little creatures that resemble beautiful men and women with gauzy wings - they are from the imaginations of deluded, psychotic, or drunk people.

Real fairies began in what you call Europe.  Long ago, magic and magic users called mages roamed the lands.  The common folk welcomed mages as visitors, because some plagues and vermin could only be gotten rid of through magical means.  But no one wanted the mages to live in their particular village, because people feared that the mage would try and control the villagers.

On a tangent, these fears were justified, as many a village perished when the resident mage tried to enforce his or her will.  Plus, mage battles did nothing to help the crops or livestock, outside of a few interesting mutations.

So the typical mage traveled around the countryside, eating and sleeping outdoors most of the time, coming into taverns occasionally, a public bath house rarely, and ordinary homes never.

One of the more well-known mages was a young woman named Hekateros.  Hekateros loved living in the city where she grew up but she also loved living in nature.  She loved helping others but she also hated much about humanity.  She adored wild animals but despised all forms of domesticated animal.  Her dual nature made her a bit temperamental.  One day, she would help a farmer with a sick herd of cows, but the next she would curse chickens to only lay spotted eggs (and no one would either eat or buy a spotted egg).

As her reputation for such extremes grew, so did the villagers' fear of her, until fear turned to intolerance.  Soon, villagers shuttered their windows and closed their doors when they heard rumors of her approach.  Farmers set their dogs or pigs on her, and even the minstrels walked through swamp and quicksand to avoid her path.

Hekateros grew lonely at first, then angry that so many people shunned her.  She quarreled with herself about the shunning, waffling between sorrowful acceptance and choleric rejection.  Finally, in a fit of insanity, she prayed to the great Goddess, asking for a curse to loose upon the villages as vengeance for their treatment of her.

The Great Goddess appeared before her.  "Hekateros, child, why do you call on me?"

"I am shunned by the villagers and farmers.  They shutter their windows, close their doors, and send dogs and pigs after me, to drive me away."

"Ah, but do you know why they do such things?"

Hekateros paused.  "Because sometimes I bless them and heal their animals or crops.  But at other times I curse them, plaguing their lands."

The Great Goddess gazed at Hekateros for a long time, until the lady could stand it no longer.  "Please, Great Goddess, I wish vengeance on them.  I need power to get them all, so that I may have peace."

"My daughter," sighed the Goddess, "you are lost."

As she heard the words, Hekateros felt her body change,  She had two faces instead of one, two faces that looked the same except for the expression.

"These two spirits cause your discord, Hekateros, not the villagers.  Since you petition me for peace, I will give you peace."

Hekateros felt herself split in two, all of her darkness pouring into one body while all of her light poured into the other.  She looked at herself, each half wondering how she ever lived with the other half.

"Now," continued the Great Goddess, "Hekateros is no more. Instead, you are now Arevik and Lusine, the sun and moon.  Go forth, and prosper as you should."

The two half-women left, and went forth into the world.  They each managed to procreate several times, each birth producing three or four offspring that looked almost human.

So began the races of the Light and Dark Fairies.

All comments welcome.
Trolls will be eaten.

Welcome to The Vampire Handbook!

The Vampire Handbook contains information and advice for humans who are curious about vampires, humans who wish to become vampires, and for newly turned vampires. If you have any questions or to request information on a specific topic, please contact the appropriate author:
To ask a general question about vampires or vampirism, email Gregory.
To ask advice about how to date a vampire, email Jennifer.
To ask questions about werewolves or other supernatural beings, email Christy.
For all other inquiries, please email Sarah.